The Releases pane is used to organize releases in your grid. It is found on the left hand side of the screen in the Organize Panel. Here all releases will be listed, along with their subreleases, which can also be referred to as child releases, milestones, or sprints. There is no limit to the number of levels in the release hierarchy. 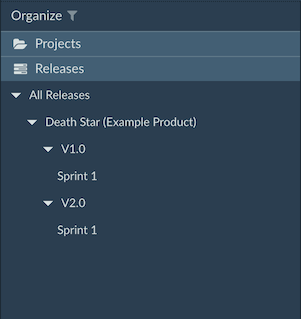 Additional information on capacity is shown below the release date when it is selected and the dropdown icon on the right is clicked, along with a projected ship date, based on initial and remaining estimates of the items in the release.

After clicking on the plus icon in the Releases pane toolbar, a modal dialog will pop up asking for the name, capacity, start date, and end date of the release. After saving, the release will be created.

Items can be assigned to the release in one of four ways: 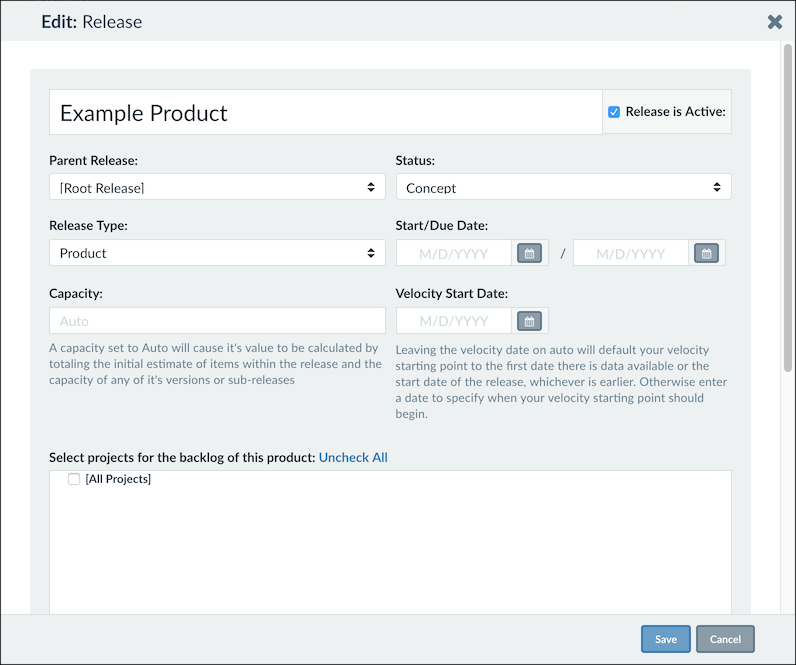 For root-level releases (which can be referred to as a product), there is an additional option to Select projects for the backlog of this product. This will make it so that when you select this release from the Releases pane, it will show all items that are in the corresponding projects as well which you can then use to easily drag and drop to any subrelease. If you would instead want to only display items which you have explicitly placed in the release or subreleases, you would want to make sure to uncheck any projects selected for this option.

If a release is no longer needed, it can be marked as inactive. It's a great alternative to deleting the release and this allows you to hide inactive release from the Releases pane and the Release field dropdown selection.

Note: If you mark a release inactive, then all items from an inactive release will be hidden from view unless the Show Inactive Releases options is enabled.

To delete a release, select the release, and either right-click the release and select Delete, or choose Delete in the More menu in the Releases pane toolbar. Any items within the release will no longer have a release assigned to them. A warning screen will prompt to confirm the delete of the release.